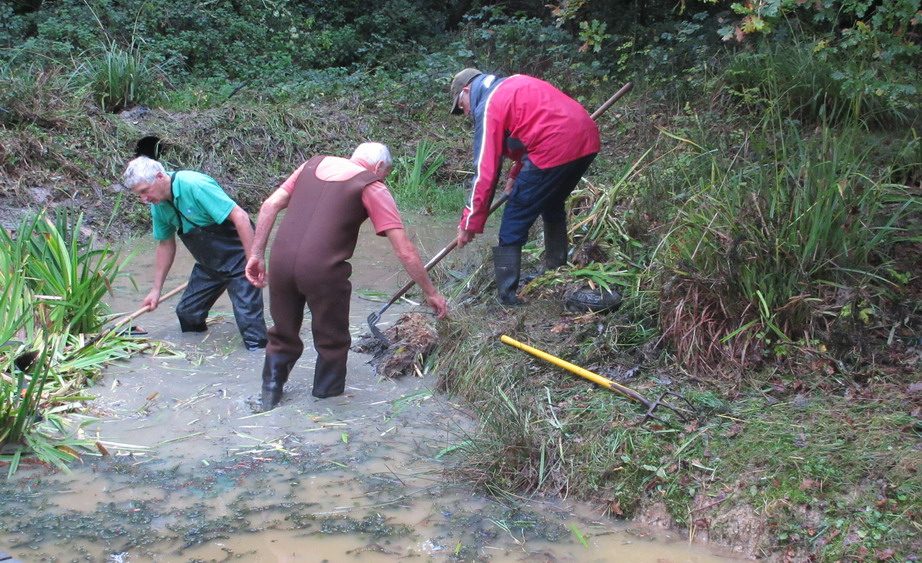 Despite overcast skies and previous heavy rain a large number of Green Gym members came to the Green on Wednesday November 4th 2015 for their third and final visit this year. They quickly got underway with scything the long grass in the Butterfly meadow and raking the debris off. Other people were busy clearing some of the tangled underbrush in the woodland and using the resultant branches to thicken the barricade which marks the end of our ground near the badger sett. 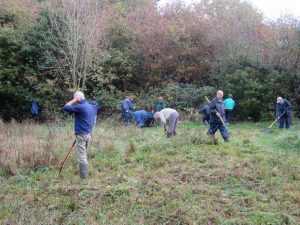 A third group donned waders and tackled the pond which had become very overgrown with grasses around the edges. A previously unidentified, and therefore untreated, area of New Zealand Pygmy Weed was found and after some discussion it was decided to carefully lift it into a black sack to minimise the chances of sections breaking off and spreading. The flag iris in the centre of the pond, after a number of years had become extremely dominant and machetes and spades were used to remove the majority of it. We know from past experience that the remaining rhizomeswill quickly grow again to flower once more next year. 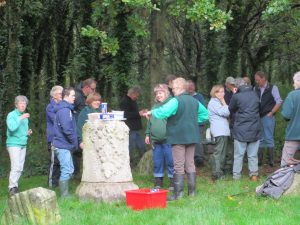 After a welcome tea break the heavens opened once more and only dogged persistence enabled the planned work to be completed. This included cutting the large buddleia hard back and also digging out some errant cotoneasters which provide a show of berries for the birds but can spread widely if left unchecked.

We have been advised that the growth of wild flowers on the Green would be helped if we could plant some Yellow Rattle, which is an  annual  which is semi parasitic on grass and which weakens their growth. After the Rattle has flowered and died back in July, it leaves patches of bare earth in which other seeds can become established. Yellow rattle has now been planted in a number of areas throughout the Green and we will monitor its progress.